How Mexico’s Top Industries Have Benefited from USMCA Updates 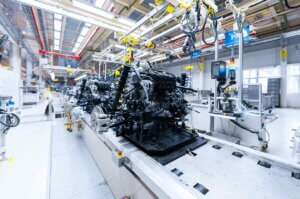 The North American Free Trade Agreement (NAFTA) served its participating countries well by placing value on nearshoring and as a result, it boosted exports, created manufacturing jobs, and increased wages for industrial labor. During this time, Mexico became one of the world’s top industry hubs and attracted millions of dollars in foreign direct investment (FDI), allowing U.S. manufacturers to grow as well.

As the economic climate changes and advanced technology moves to the forefront of manufacturing, the original NAFTA agreement has been retired to make way for the United States-Mexico-Canada Agreement (USMCA), which was officially enforced in July 2020. Though this updated trade agreement carries many of the same advantages as before, there are specific provisions and inclusions that better address the needs of today’s manufacturing landscape.

Certain sectors, including automotive, aerospace, and electronics have already felt the positive lift the USMCA has provided. Here’s how:

Automotive manufacturers have secured ongoing success when nearshoring to Mexico with a significant lift in productivity after NAFTA was enforced. From 1994-2006, light vehicle production more than tripled, increasing from 1.1 million units to 3.5 million units. The steady growth and increased FDI created an established infrastructure and reliable supply chain future manufacturers could benefit from. Under NAFTA, Mexico also phased out tariffs on motor vehicles and automotive parts, as well as logistical costs throughout the North American market, making Mexico a highly desired, strategic manufacturing location.

Building upon the success of NAFTA, the USMCA Rules of Origin increase the content requirement from 60-62.5% to 70-75%. The new deal also supports higher wages by requiring earnings of $16 per hour for 40-45% of auto content. These changes have been established to preserve and incentivize reshoring of vehicles parts and production and transform supply chains to use more North American content.

Aerospace is a continuously growing sector in Mexico with an export value amounting to $9.5 billion USD in 2019. This represents over a four-fold increase in aerospace exports over the past decade. As with automotive manufacturing, NAFTA’s tariff structure helped catapult the growth of the aerospace industry in Mexico and attract global leaders, including Lockheed Martin and Boeing, both of which source parts from Mexico.

Part of the advantages under the USMCA is the modernization of trade with North America including intellectual property (IP) protection, trade facilitation, and market access for goods. Since innovation is one of the key factors in aerospace manufacturing, the extensive IP protection under the USMCA combats IP theft and enforces legal procedures for applicable penalities.

Additionally, trade facilitation through the USMCA creates more efficiency through standardized rules when nearshoring to Mexico, which reduces transaction costs and administrative delays. Furthermore, the limitation set forth on the increase of duties allows for more predictive planning when sourcing parts and components within the domestic supply chain.

Greater IP protection and established procedures on tariffs also support the development of electronics manufacturing. The USMCA establishes the highest standard for any U.S. trade agreement by protecting copyrights, industrial designs, and patents, among other legal provisions. Global companies like Samsung and LG can better protect their FDI in Mexico due to these greater protections put into place.

In addition to the significant benefits of the USMCA, foreign manufacturers from all sectors also have tax advantages under Mexico’s IMMEX maquiladora program. When approved under the IMMEX maquiladora program, U.S. and other foreign manufacturers are exempt from the 16% value-added tax on temporarily imported goods, materials, and equipment. To expedite operations and receive this exemption from day one, manufacturers choose to work with a shelter company like IVEMSA.

At IVEMSA, we already maintain IMMEX certification, as well as other necessary permits, and take on the burden of legal risk and liability for foreign manufacturers nearshoring to Mexico. Meanwhile, all administrative duties necessary to set up a new operation are handled by our team of experts, allowing you to prioritize production and day-to-day management.

Nearshoring to Mexico is a leading strategy for today’s manufacturers partly due to the incentives set forth by the USMCA. Let’s discuss how IVEMSA can help you reach your company’s goals. Contact us today.