How NAFTA Ignited the Rise of Mexico’s Economy 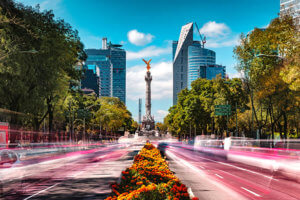 NAFTA was established in 1994 and served as a trade agreement between the U.S., Canada, and Mexico to eliminate most tariffs on trade between the three countries. One of the goals of NAFTA was to boost economic growth in all three countries while creating new jobs. Different chapters of NAFTA included protection of intellectual property rights, dispute settlement procedures, rules of origin, and customs procedures. Some examples of its success included:

One of the key industries that reaped the benefits of this trade deal was the automotive sector. After NAFTA took effect, global companies such as Ford, GM, and Chrysler, among others began manufacturing in Mexico. Mexico’s light vehicle production more than tripled from 1.1 million units to 3.5 million units over two decades (1994 to 2016).

As of May 2019, 16% of all auto parts used by U.S. assembly plants come from Mexico, per estimates from the Center for Automotive Research, and $59.4 billion in parts were imported from Mexico last year. The success of these trade relations has led to increased investment in Mexico from the U.S. and other countries, which has resulted in an increase in Mexico’s exports and thousands of manufacturing jobs to help boost Mexico’s economy.

Fast forward nearly 25 years, in 2018, when NAFTA was replaced with the USMCA or the United States-Mexico-Canada Agreement as a continued, modernized way to maintain solid trade relations. Per the Office of the United States Trade Representative, this 21st century agreement will “support mutually beneficial trading leading to freer markets, fairer trade, and robust economic growth in North America.”

The Success of the Maquiladora in Mexico Drives Business Growth

The success of the IMMEX maquiladora operation in Mexico has also benefited the country’s economy and the level of production for the U.S. When a U.S. company with a manufacturing site in Mexico imports goods and raw materials with the intention of exporting the finished products during a certain timeframe, these companies are exempt from VAT payments at Mexican customs when operating under the IMMEX maquiladora program.

The solid trade agreements and the rise of the maquiladora model only add to the benefit of the skilled labor force in Mexico and the close proximity from Mexico to the U.S. Additionally, U.S. manufacturers that choose to operate under a shelter have access to an already established maquiladora license. This investment also provides other tax benefits, permit and license compliance, reduced risk of legal liabilities, and savings versus setting up as a standalone entity.

For companies that wish to operate as a standalone entity, there’ still value in partnering with a shelter company for consultative services. Either way, the cost-effectiveness and convenience works well for the U.S. and other foreign countries interested in manufacturing in Mexico. And, it continues to allow Mexico’s economic status to thrive with job creation and investments from foreign companies.

The lift that NAFTA provided to Mexico’s economy in the mid-90s was the jumping off point to the competitive force the country is today. In recent years, more manufacturers have begun to shift operations to Mexico as other previously viable opportunities have dwindled, particularly in China. As of 2018, U.S. goods and services trade with Mexico estimated a total of $671.1 billion with machinery, electrical machinery, and vehicles as part of the top five export categories.

To learn more about the advantages of manufacturing in Mexico to boost your company’s business opportunities, contact IVEMSA today.