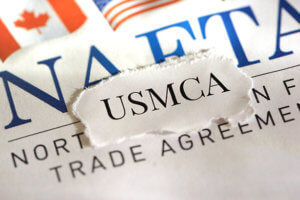 Talks about ratifying the USMCA trade agreement have been ongoing for over a year. As of December 2019, all three countries have signed the agreement and issued a revised version, which is expected to be enacted this year. While specifics are still being finalized, including changes to labor standards, there will be a greater understanding about the impact of the updated trade deal once the timeline is established.

Once officially passed, there will be time allowed to adjust to the new requirements (an earlier version of the agreement indicated a three-year rollout), after which all parties must fully adhere by the outlined and agreed upon trade policies. From the date the USMCA goes into effect, it’s valid for 16 years, although a review is already set for 2026.

Knowing the scope of what is expected to be approved with finality in 2020 helps manufacturers and other businesses better prepare for any changes that may affect them directly. Highlights of the agreement include changes within the categories of labor provisions, intellectual property protection, and automotive production.

Each country must be in compliance with labor laws through appropriate government action, including, but not limited to:

A press released by Labor Federation President Richard Trumka noted, “For the first time, there truly will be enforceable labor standards—including a process that allows for the inspections of factories and facilities that are not living up to their obligations.” These updates promote better working conditions and a fair wage for factory workers, which in turn, helps to boost productivity and performance in the workplace.

Updates to the intellectual property rights of the USCMA focus on areas including internet service providers (ISPs), trademarks, trade secrets, and enforcement as follows:

Strict and enforceable intellectual property protection is one of the many factors companies consider when exploring Mexico manufacturing solutions. Having these provisions applicable to digital property brings the updates into the modern era.

Read more: An introduction to customs clearance in Mexico.

Per the revisions to the USMCA, the percentage of automobiles and automotive component products in North America has increased to 75% and 60%-70% respectively. Additionally, 40% of automobiles must be made in factories that pay labor wages of at least $16/hour. This helps to perpetuate an already competitive workforce in Mexico and further emphasizes the subject of labor law reform.

With rising trade conflicts between the U.S. and China over the past two years, manufacturers have already begun to explore alternatives. Under the provisions set forth by the USMCA, it gives companies an increased incentive to expand or move their operations from China to Mexico. Many of these protections have already been in place as part of NAFTA, but have now been updated and improved under the ratified trade deal.

In addition to being logistically closer and more cost-effective, labor reform, modernization to intellectual property protection, and retaining the majority of automotive production in North American further tips the scales in Mexico’s favor.

Want more information about how manufacturing in Mexico can benefit your company? Contact IVEMSA today.

* The information provided in this blog is reflective of the text version of the USMCA dated 12/13/19.