The Importance of Learning the Culture When Manufacturing in Mexico

Conducting business in a foreign country involves understanding and immersing yourself into the environment of where you are. For U.S. manufacturers that choose to expand operations to Mexico, it’s important to understand the cultural differences between the two countries. It will help to create a smoother transition, greater respect, and more effective communication, all of which results in better business relationships. 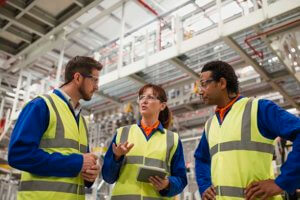 One of the most important parts of Mexican culture is the focus on family. Although Mexico follows a 48-hour work week as opposed to the typical 40-hour work week in the U.S., Sunday is reserved solely for time spent with the family. Recognizing the labor laws of the country and the work-life balance of employees is especially important to align with what is recognized by the culture.

Another cultural factor to consider is that Mexican businesses are traditional when following a hierarchical structure of authority. It’s important to recognize and abide by professional titles. When meeting a businessman or businesswoman in Mexico for the first time, it’s appropriate to use “licenciado” for men or “licenciada” for women. This shows you’ve acknowledged and respect their professional standing.

With over 110,000 engineers graduating each year, the focus on education and training carries weight and establishes Mexico as a strong labor force. A general understanding of customary traditions and beliefs people value will strengthen any business relationships you have.

As with any company, a business relationship can only be successful if it’s built on trust and effective communication. This takes time when doing business in Mexico. Mexican culture focuses on expressiveness to a higher degree, often non-verbally, which can be an adjustment for U.S. companies that are starting a business there for the first time.

Rather than jumping straight into the details of a project, it’s normal to briefly discuss more informal topics like families or exchange other pleasantries. The first impression makes a difference in how the rest of the business relationship will go. Without the “getting to know you” part of the negotiation or meeting, it doesn’t set a good tone.

Another cultural norm in Mexico is a handshake followed by a hug after a meeting with someone you’ve already met. When meeting with women, a kiss on the cheek is also customary if you’ve met with her before. The standards of U.S. culture where a handshake followed by diving straight into business matters are translated into a more hospitable environment in Mexico where a quick embrace isn’t unusual.

When engaged in conversation, people in Mexico typically talk at a closer distance and may briefly touch you on the arm or shoulder to engage. Since Mexicans are more tactile in their social interactions, personal space seems much smaller than what Americans may be used to. Distancing yourself from these gestures may seem unfriendly and likely won’t result in as favorable of communication in the future.

The importance of being bi-lingual is less of a factor when manufacturing in Mexico than how you choose your words. For example, Americans characteristically are concise and pragmatic in their language when conducting business. Mexicans, on the other hand, tend to use longer sentences. They also aren’t as direct in communication as Americans are, especially when negativity is involved.

Additionally, Mexicans are rarely blunt and seldom give direct refusals since this is considered impolite. They are more tactful in their conflict resolution and an affirmative response may mean “maybe” depending on the situation. A strong business relationship between parties from both countries is built upon the understanding of certain non-verbal and indirect cues. These can easily be lost in translation through emails or other digital channels. Regular phone calls or in-person meetings can help to alleviate miscommunication or misunderstandings and allow the relationship to thrive.

Finally, it’s traditional to end business meetings with a meal once a relationship has been established. During these times, it’s an opportunity to connect more personally and increase the level of trust and confidence among everyone. Taking the time to learn the culture is important whenever you’re doing business in Mexico. It helps to build strong, long-lasting relationships in the country where you’re manufacturing.