5 Reasons to Consider Merida When Nearshoring to Mexico

Nearshoring to Mexico is not a new concept. Foreign manufacturers have benefited for decades, with most facilities conveniently set up right across the U.S./Mexico border. However, expansion into the central and southern region of the country uncovers new opportunities to successfully operate in areas that aren’t as heavily saturated. 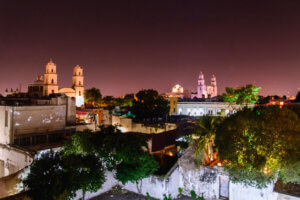 Merida is one of the main locations to keep on the shortlist of places to set up nearshoring to Mexico. This region is experiencing a heavy industrial growth phase, comparable to the one that northern border states had 20 years ago, which means investment now will have significant returns in the future.

Here are five main reasons why foreign manufacturers are turning their attention to Merida as part of their next operational base and overall strategy.

The quality of life in Merida has been compared to New Zealand and Iceland, with advanced security levels that make it the safest in Mexico. Though a growing tourist destination, it maintains a laid-back, welcoming sense of community which feels like a good place to put down roots and call home. Differing from the lifestyle of nearshore manufacturing near the U.S/Mexico border, where people are more likely to live in the U.S. and work in Mexico, Merida is a place to call home.

The growth of Merida has been significant as global companies like aerospace and defense application manufacturer PCC and automotive manufacturer LEONI have set up operations over the past few years. With a strong and reliable supply chain at Puerto Progreso (Merida’s port), organized growth, and strategic access to the Gulf of Mexico and the US border by land, Merida is a prime area to expand operations.

For foreign manufacturers seeking stability in the workforce, the loyalty of labor in Merida is a well-known advantage. Though there are fewer numbers of available manufacturing employees when compared to other industrial hotspots in Mexico, there’s a far higher percentage of employee dedication with people who are well-trained and ready to work.

Many employees work for the same company for upwards of 20-25 years, which means less training, turnover, and hiring costs for the company. In regards to long-term investments, labor costs alone represent a significant savings advantage when setting up operations in Merida.

Another one of the key advantages of nearshoring to Merida is the ruling government is pro-business and focused on advancing the industrial sector. There are first-level support services, research centers, science and technology parks, solar radiation for clean energy, worldwide connectivity, and a lot of available land, which can be built to suit in a quick eight months.

Even during this transitional time, the industry growth in Merida is apparent. In 2019, there was $158.3 USD of foreign direct investment in the state, compared to $85.2 million USD the year prior. Also, Yucatan experienced economic growth of 1.6% at the end of 2019, while the national average in Mexico dipped to -0.1%. It’s an international hub with worldwide maritime, aerial, railroad, and highway transportation easily accessible and reliable.

How IVEMSA Supports Your Manufacturing Growth

Mexican northern border cities continue to be the favored place when nearshoring to Mexico. However, there are various regions throughout the country that can offer similar benefits with less competition and at a lower cost. Merida offers foreign manufacturers yet another opportunity to consider as part of their long-term strategy.

Though it may not be the right fit for every company, at IVEMSA, we can talk through different options and help you determine which will work best. Contact us today to get the conversation going and learn how we can help you reach your manufacturing goals.