US and Mexico Economies Grow Together

While US President-Elect, Donald Trump, won over many supporters by promising to build a wall against Mexico with the promise to create new jobs in the United states, two global material suppliers told a very different story about the success of US/Mexico relations.

The success of Industrias Penoles, a producer of refined gold, silver, lead and zinc and Cemex, the largest cement maker in the Americas is directly related to US growth. Both companies are creating US jobs and helping to increase American manufacturing.

Managing Director at PineBridge Investments in Los Angeles, Laila M. Kollmorgen, recently stated in a Bloomberg article, “The Cemex rally is a reflection of commercial real estate development in the U.S. There’s a lot of construction going on right now.”

The article states “NAFTA was neither the killer nor creator of employment that its enthusiasts and detractors predicted. It did make the U.S. economy more efficient and therefore stronger. That’s what global investors like about it.”

The rise of Penoles and Cemex points to the strengthening US job market where unemployment has fallen 5 percent from a high of 10 percent in October 2009. Housing starts have doubled according to Bloomberg data. The number of construction jobs climbed 23%. 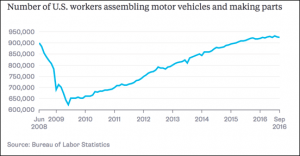 While Trump claimed that NAFTA is taking American manufacturing jobs, the contrary is true. According to the Bureau of Labor Statistics, the number of workers assembling motor vehicles and making parts has increased 50 percent since 2009.

Mexican cement and refined metals are contributing to the U.S. expansion. NAFTA continues to provide a symbiotic relationship between The United States and Mexico.