The Real Cost of Building a Wall

A Hit to the US Economy and Mexican Manufacturing

The proposed wall between the US and Mexico will cost an estimated $10-$12 billion. A tremendous amount of money; but the real cost would be the 4.9 million US jobs that will be lost if a border wall is built and the proposed taxes and tariffs are imposed.

There are claims that building a wall will make America safer and more self-efficient without addressing the reality that both economies rely heavily on their international trade. The loss of trade between the United States and Mexico would be severely harmful to the US economy as well as cause nation-wide job losses. Tariffs would also increase, raising the cost of goods sold and services provided in The United States, which are currently lowered due to Mexican manufacturing.

A recent Forbes article included the statement “Two-way trade amounted to $584 billion in 2015 and is up 35% from 2010, a rate much higher than that of U.S. trade with the rest of the world”. The well-being of many US companies and jobs depends on this unique and mutually beneficial trading between the United States and Mexico.

According to a Wilson Center study, 4.9 million service and manufacturing jobs in the United States rely on trade with Mexico. 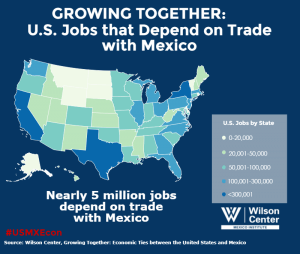 The article also states, “Mexico is fundamental to U.S. competitiveness and prosperity.  It is a critical partner on a range of energy, political, security and environmental issues.  We should invest in strengthening that partnership, not endangering U.S. jobs and companies, as well as our overall relationship with Mexico”

It is important to consider the benefits of international trade and manufacturing with our Southern neighbor before voting to impose these new tariffs and regulations. They could cost you.