President Enrique Peña Nieto, who visited Copenhagen last week, is the first Mexican president to visit Denmark for an official state exchange. Upon his arrival, as is protocol for a state visit, the President was greeted by Queen Margrethe II. 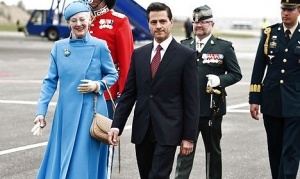 The Queen is the Commander-in-Chief of the Danish Defense Forces, and although she does not express any political opinions, one of her main roles in the monarchy is to represent Denmark abroad.

Denmark currently has more than 218 companies operating in Mexico, including the shipping mogul, Maersk. The Danish company, headquartered in Copenhagen, has been the largest container ship operator and supply vessel operator in the world since 1996.

In the nearly two centuries since Mexico and Denmark established diplomatic relations, Denmark has cemented more investments in Mexico than any other Nordic country. They are Mexico’s eighth largest trading partner in the European Union with $689 million of commerce between the two countries in 2014. In 2015, Danish exports to Mexico totaled 3.5 billion kroner , a 51 percent increase from 2011. (1 Danish Krone = 0.152630 United States Dollar).

In more recent years, the two counties have collaborated to combat global climate change and with the support of the Danish government, Mexico has strengthened its participation in the United Nations peacekeeping operations.

President Nieto expressed, “It is an honor to be the first Mexican president to come to Copenhagen to make a state visit.  It is an ideal way to open new areas for political dialogue, boost our economic ties and renew the bonds of friendship between our countries. He concluded, Mexico hopes the visit demonstrates “the true potential of the bilateral relationship” specifically in investment, trade, and clean energy generation.”

Danish foreign minister, Kristian Jensen, said that Mexico is an “exciting nation,”  and referencing a report from the Foreign Ministry of Denmark she noted, “The report highlights the good development in trade between Denmark and Mexico over recent years and underlines the potential to lifting exports with 1 billion kroner looking ahead to 2020.