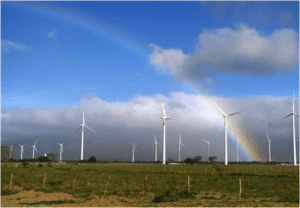 Next month in Paris, during a United Nations conference, Mexico intends to roll out a plan detailing how they will uphold the pledge of becoming cleaner and cutting greenhouse gas (GHG) emissions significantly by 2030. The nearly 200 countries attending are also expected to sign a deal to combat global warming.

Earlier this week, Enel Green Power SpA reported they would invest approximately 250 Million USD in a Palo Alto wind farm in Jalisco, Mexico. Construction is already underway on the 126 MW (MW, metric measurement of power) wind park with plans to start producing power by mid 2016. Enel estimates their wind farm will generate enough power for as many as 200,000 homes.

Enel is just a piece of a much bigger plan in President Enrique Pena Nieto’s endeavor to completely revolutionize the country’s energy industry. The wind energy plan is the result of two integral advances he’s made since taking office:

According to a report in Bloomberg Business Journal, Mexico has designs on quadrupling its wind power capacity and installing 20 gigawatts (GW) of clean energy by 2030. Currently, 75% of Mexico’s power comes from fossil fuels.  Though expansion in its use of more sustainable energy sources, Mexico could lower fossil fuel based energy generation to as little as 45%.

$46 billion is the reported price tag of this robust focus on the wind power plan.  “Investors are starting to line up their horses,” said Lilian Alves, a New Energy Finance analyst in Sao Paulo.  And, according to Adrian Escofet, president of Mexico’s Wind Energy Association, “Power companies are keen to jump into Mexico’s clean-energy market as soon as rules for the auctions and certificates are finalized.”  Polices are expected to be issued this month.

Moreover, as investors begin to put money behind the wind projects it produces significant economic activity and translates into jobs, both temporary construction jobs and permanent jobs required to operated the wind farms once up and running.

“A great wind is blowing, and that gives you either imagination or a headache.” ~Catherine the Great