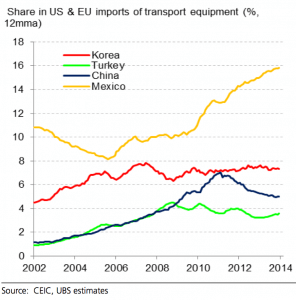 Oh the difference a decade can make. In the last ten years, Mexican auto exports to the U.S. more than quadrupled from 1993 to 2013, and with three new plant openings over four months Mexico’s advance over Japan is assured. In fact, by 2015, Mexico’s tally is projected to reach 1.9 million, topping Canada as the biggest exporter of cars to the world’s largest economy, as reported by ISH Automotive, a Massachusetts based consultancy.

And the manufacturing growth in Mexico doesn’t stop with automotive. Economic trends point to near shore manufacturing being the “new normal” and a significant piece of a global economic shift.  “In the transport equipment and parts sector, China has lost market share to Mexico in both the US and the EU,” according to Tao Wang a China economist for UBS.

Contributing factors include average electricity costs that are about 4% lower in Mexico than in China, and industrial natural gas averaging 63% lower, according to a study by the Boston Consulting Group. (BCG)

The same study found that by 2015, average manufacturing-labor costs in Mexico are projected to be 19% lower than in China.  In 2000, Mexican labor was 58% more expensive than in China.  Conversely, in U.S. dollar terms, China’s unit labor cost has grown over 60% since 2007.

The industries expected to see the biggest production gains are likely to be transportation goods, computers and electronics, appliances, and machinery.

Due to Mexico’s growing cost advantage, production in these industries could increase 7 to 19 percent by 2017 over and above the projected level if current growth trends remain the same. This could result in 300,000 to 900,000 direct manufacturing jobs annually in Mexico and 1.5 million to 3.5 million jobs in related services jobs.

The U.S. will be positively economically impacted as well. “It’s good for America, since products made in Mexico contain four times as many U.S.-made parts, on average, as those made in China,” said Harold L. Sirkin, a senior partner at Boston Consulting Group in a recent report on Mexico’s growing cost advantage.