Maquiladoras first came to the Mexico/U.S. border region in 1965, when the Mexican government initiated the Border Industrialization Program (BIP) as means of attracting foreign investment to the area, reports the Industrial Development Commission of Mexicali (IDC). The BIP was introduced as a response to the termination of the Bracero Program, created by the U.S. government during World War II, to supply Mexican agricultural workers as contract laborers to meet labor shortages in the United States.

Today, a maquiladora is a manufacturing operation in a free trade zone (FTZ), where factories import material and equipment on a duty-free and tariff-free basis for assembly, processing, or manufacturing and then export the assembled, processed and/or manufactured products; sometimes back to the raw materials’ country of origin.

Foreign direct investment in maquilas, as they are commonly known, reached nearly $13 billion last year, up from only $7 billion in 2012.  That jump puts economic results at their highest level since before the recession in 2007, according to Mexico’s national statistics institute, and the value of maquila exports has jumped nearly 50 percent from pre-recession levels.

The growth and diversification of Mexico’s maquila industry in 2014 continues to be a key supplement to the U.S. border economy, and to U.S. manufacturing in general.  Today the momentum is growing and turning Mexico into a major economic powerhouse  that is taking business away from China and other Asian nations for the first time in decades.  Reasons include: 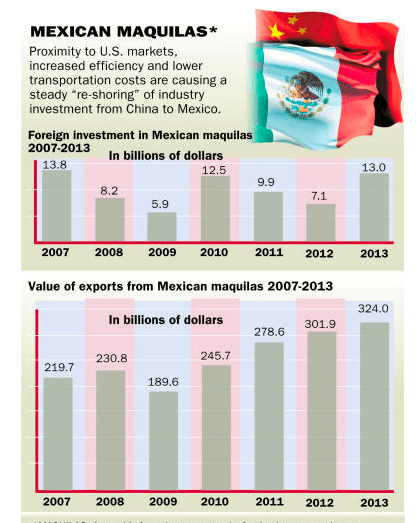 The Industrial Development Commission of Mexicali, a partnership between city government and the private sector, is a pioneer model for economic development and FDI (Foreign Direct Investment) attraction of business to Mexico.

Sergio Tagliapietra, previously served as head of the IDC, and in February of this year, Mexicali’s Mayor, Jaime Diaz, appointed IVEMSA Marketing Director, Alfredo Garcia, as the President of the area’s IDC.