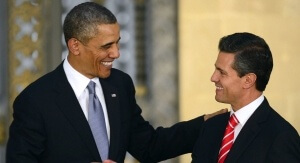 It’s a bold claim, but one that is backed up by the facts. A recent Los Angeles Times article included the statement, “Multinational manufacturing companies hire an extra 250 U.S. workers for every 100 employees they bring on in Mexico, according to a 2014 study by researchers at the Peterson Institute for International Economics, a nonpartisan organization.”

And so the synergy between the U.S. and Mexico continues to grow stronger, in no small part thanks to the reality that Mexican manufacturing operations are powered by American goods and services.  As also stated in the article, “Around 40 cents of every dollar that the United States imports from Mexico comes from the U.S., compared with just 4 cents of every dollar in Chinese imports, according to the Woodrow Wilson Center.”

Today’s economic realities demand that manufacturers stay globally competitive by cutting costs. Putting some portion of their operations in Mexico allows them to do so while continuing to support the U.S. economy. For more information, contact IVEMSA, the Mexican manufacturing expert, and read the entire LA Times article.