Electronics Manufacturing Services in Mexico: What You Need to Know 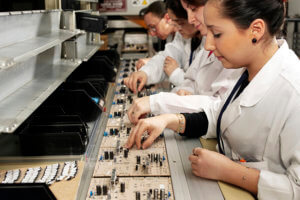 The electronics manufacturing services (EMS) industry in Mexico is strong and diverse. Across the country, you’ll find everything from Tier 3 suppliers to OEMs manufacturing a diverse range of products, from specialized machinery to consumer goods.

In 2016, Mexico was the sixth-largest producer of electronics worldwide and third-largest producer of computers. Worldwide machinery exports, including components and accessories, totaled $145 billion, according to the Observatory of Economic Complexity.

In 2016 (the most recent year for which data is currently available), the top exports for Mexico’s electronics manufacturing industry included:

This list highlights the diversity of the EMS sector in Mexico.

The US was the top destination for Mexico’s electronics manufacturing exports (only China exports more electronics to the US) in 2016. The other major electronics markets for Mexico include Canada, China, Germany, and Japan.

While you can find electronics manufacturers operating throughout Mexico, certain regions have established strong reputations in the industry.

Tijuana specializes in TVs, radios, and other appliances. The industry here is driven by a well-established supply chain and the proximity to the US/Mexico border. Baja California overall hosts over 200 electronics manufacturers.

Guadalajara has become known as the “Silicon Valley of Mexico.” The city received an estimated $120 million invested in hi-tech startups over a recent four-year span and has several well-regarded public and private universities that specialize in science, technology, engineering, and math (STEM) programs.

Forbes reported that between Mexico’s electronics exports increased by 73% from 2002 to 2012. One of the biggest factors in the growth of Mexico’s EMS sector is the low labor and overall operations costs. KPMG’s Competitive Alternatives report, released in 2016, stated that Mexico offered 11.9% cost savings on manufacturing electronics equipment and components compared to the US.

Are you an electronics manufacturer interested in establishing operations in Mexico? Learn how IVEMSA can ensure your success.